Last night, I went to bed nice and early so that I can wake up for the 6:00AM morning prayer time at our church (we are having a few weeks of these during Lent). I fell asleep around 10:00 but was awoken to the sound of my brothers talking in the family room. It actually sounded like a funny conversation because of all the laughter and such.

Anywho, they soon went to bed, and I was WIDE AWAKE. I tried to fall asleep for about 1.5 hours (took my drowse-inducing antihistamines, got comfortable, tried to clear my mind… even pretended to already be asleep) with no luck. I took out my laptop around midnight, read some other blogs, tried to read boring running articles, then tried again a little after 1:10AM to sleep.

HOORAY, I think I was asleep before 1:30AM… and that’s why I got super mad at my alarm when it went off at 5:00AM. I snoozed for ten minutes, then turned on the side lamp and envisioned myself drinking a hot cup of coffee (BTW, that is my morning routine. The bright light makes it hard to fall back asleep and I love a cup of coffee in the morning that it gets me out of bed).

Oh, wait. I ended up making mate vana tea with the water boiler because the coffee maker is too loud and might wake everyone.

Got to around 6:10 and had a good time praying about the various ministries in the church, Lenten commitments, people who are hurt/sick, and for myself.

Honestly, I don’t pray enough. I can read the Bible everyday, but praying these days… I somehow lack the desire for it. That’s why I hope to restore my desire for praying during Lent by devoting a small amount of time (like 5 minutes daily). to lift up my burdens to God.

After a refreshing time of praying, Pastor Justin, Neal, Jenn, and I went to grab breakfast! Stacks’ is known for their pancakes (duhh) and their other breakfasty foods.

I immediately downed two cups of coffee and my… it was delicious.

This is Neal and Pastor Justin. I have no idea why they’re being so hardcore in this picture, hahahaha. 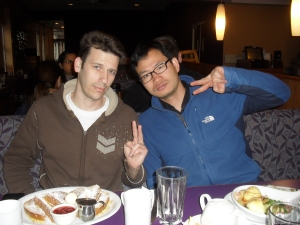 This is Jenn! I have yet to have her sign up for a race, but she’ll do it… one of these days…

I got a veggie scramble with all sorts of veggies and two dry toasted bagels. I ate the whole dish except for one half of the bagel.

After breakfast, I came home and studied for a solid hour. I felt a tiny wave of sleepiness and immediately plopped into bed to try to get more shut-eye.

It ended up being a one-hour nap. Not bad, but the effects of sleep deprivation will probably strike later…

…or perhaps it hit right away:

I think the lack of sleep turns me into a carbavore. Look out starches! I’ll be eating ya’lls at first site, today!

So I toasted up the other half of my bagel from this morning and spread a thick later of peanut butter and then some pumpkin butter on top. I didn’t have a banana this morning, so I definitely had to have one.

And can I say… this PB&PB combo on a hot and toasty a bagel is absolutely delectable? Although somehow, I made it looks messy and perhaps not so enticing.

Though I’m lacking sleep, I still plan on doing an Insanity workout. I may drop by at the gym to walk on the treadmill before work (carpets are getting shampooed so I need to be out of the house anyways).

Haha, my mom was saying the guest room, which I use as my workout room, needs the carpet-shampooing the most. She thinks it’s because I work out in there and sweat like the men in my family (which I do)… what she doesn’t know is that I sometimes sneak my wet dog in that room at night and play together for an hour. Hehehe, don’t tell my mom. <— And I’ve officially turned into a five-year-old by saying that.

Have a good Thursday. Friday is just around the corner! Woo hoo!

2 responses to “One of Those Nights”