Hello! Just wanted to show off my “Achievement Book” <– although that name is totally lamesauce and requires a super cool name with more pizzazz. If you have any in mind, let me know 🙂

So you know the race bibs that they give you when you sign up for a race? I luckily kept all of mine in a special box and decided to put them in a photo album (the kind that’s sticky and has a plastic cover over it).

It starts from the very beginning of my running journey in April 2009:

The Pat Tillman run was 4.2 miles and I showed up late, didn’t have time to put on the timing chip, and thought it was the hardest, hilliest run every (I only ran a mile or so on the treadmill during that time, It was also not hilly). This is the race that Noel and her husband signed me up for! Thanks, you guys!

The Rock’n’Roll San Jose Half Marathon in Oct 2009 was the first time I “trained” for a race (I didn’t really push myself during the race though, so my time was 2:13:12). My second Half was in Feb 2010 for the Kaiser SF half marathon and I actually pushed myself and got 1:52:xx

The Mermaid Run Sirena 18 miler in May 2011 was the longest distance I had ever run at the time. I even made it on to the leaderboard (5th place, haha). Time was 2:21:45. The Jungle Run Half marathon in July 2011 was so fun and memorable because it was Michael’s first race! I loved running with my brother, and we got 1:58:xx.

In August 2011, Michael and his friend, John, ran the Dammit Run (5 miles, running up a flippin mountain side… then down for the second half). In Sept 2011, I ran the Trail Hog Half, which was my very first TRAIL RACE. This was no joke peoples… probably one of the hardest races up to that point. I got THIRD WOMAN though (time was 2:06:14).

There was the Warrior Dash some time last year, which was 3.4 miles. I don’t know where my muddy bib is, so I might just put a picture there. I ran it with Pastor Justin and Phil. They were kind enough to wait for me as I tried to climb over a wall and such. 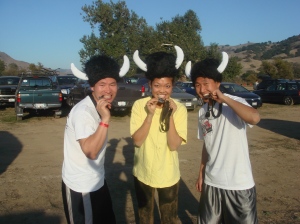 I ran my very first marathon at the end of last year in December, and I was definitely on top of the world at that point. 3:40:30 for my first marathon? I WILL TAKE IT, THANK YOU. I signed up for the California International Marathon for this December as well. I would love to have like a 3 or 4 minute PR. We’ll see how it goes :). The Jingle Bell Rock was actually my first 5K, and it was so fun to run it with Robin, Neal, and Tammy. We wore holiday headbands and took it easy.

My newest addition to the book was the 10K from Sunday:

I like keeping the bib because I can look back on it and remember how hard it seemed during that time, yet how much I have improved since then.

It also has whatever sweat or Gatorade that was spilled on it, like an unwashed jersey of some NBA player… it’s the real deal.

This walk down memory lane was fun! Did you notice that the number of races I entered suddenly JUMPED last year? Yeah. I’m kind of addicted. I’m trying to get everyone hooked, hehe.

BTW, did you do the challenge I presented to you yesterday?

Are you planning on doing the challege later today?

Michael and I just finished it. I’ll post again tonight to let you know how everything went.

Have a good rest of the day!