Joe and I walked around Downtown Sacramento. We walked around 1 mile, and man… it was like a ghost town. All the shops were closed!

At least the weather was beautiful 🙂 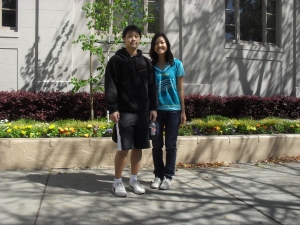 I got Joe to walk up the parking garage steps one time (seven stories!) so we could build up an appetite. Even though I had just run 10 miles, I wanted to really earn my all-you-can-eat sushi, so I went up twice.

Downtown Davis was lovely, as always. We got a cornerish table in Davis Sushi, and so the servers somehow kept missing our table. Other than that, you just go up to the sushi bar and grab whatever is on there. Majority of the rolls had a good amount of rice and rather shrimp tempura or imitation crab (lots of mayo). Hmph.

[Okay, it’s because we’re comparing to our ultimate all-you-can-eat sushi spot in Reno. That place as such fresh sushi, little rice on each roll, and not all of them are mayo-y and sauce-y. It’s our secret favorite spot 😉 ]

I didn’t want to put up each individual picture, so you can just take a look at this picture collage of all the things we ate. 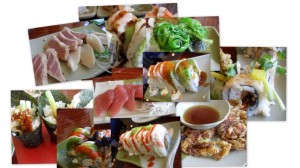 We ordered a few more things that weren’t documented. I ordered two maki thingies near the end, thinking that it would be small… whoops. They ended up being really big and having so much rice that I was having trouble finishing them after like two pieces (each order comes with six humongous ones).

If I had to pick, I’d say the deep fried soft shell crab is the best. Everything else is what you should expect from a lunch sushi buffet that costs $13.95 <– super cheap cheap!

Since we were so full and moving at a small-penguin-waddle pace, we took a stroll around downtown.

Got some Peet’s Coffee (cafe au lait for me):

Went into a comic book/games/board game/action figure store called Bizzaro‘s (or something). It was fun to look at some of the old board games they had 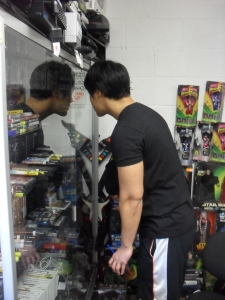 We had a great time (even though Joe looks like he’s getting a picture taken for the army or something). I think we walked another mile or so. And honestly, the weather was just amazing! 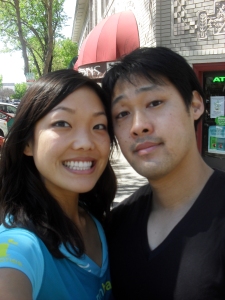 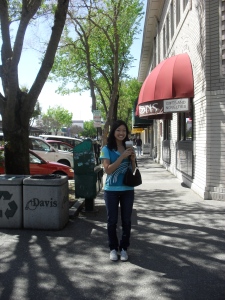 Hooray! I love coming up here 🙂

Got home and there was a package waiting for me…

These usually go for $50 each pair, but there was a crazy sale through Swaggle and they were selling for $25 each. I was going to go crazy and buy like 5 of them, but I thought about how weird it would be to say I spend $125 on 5 pairs of socks…. so I had to rein it in and only get two.

Well I love compression socks because I feel like they help with the recovery after a long run. Even if they don’t really help, they’re are just extremely comfortable.

Plus, not I have it in the blinding pink color, so everyone can spot my swit calves from a far-off distance.

I had this huge salad thing for dinner. It’s mixed greens, apple, orange spaghetti squash, and rotisserie chicken (looks like tuna). I drizzled a bit of poppyseed dressing on it after.

I was trying to just get a lot of produce last night because I have been feasting like a maniac during the weekend.

… starting now (haha, Michael and I went to Fresh Choice for lunch today).

Right now, I am off to hang out with my mama 😀