Yesterday was the day that Joe went one step closer to being super duper old (ha, I joke. He turned 29 years young).

I was going to go for a long run yesterday, but I was lured in by none other than Shaun-T toward those darned Insanity videos. I ended up getting crazy with the Max Interval Circuit (about 1 hour long) and enjoying every part of it.

I had some extra time before YA Bible study, so I asked Michael if he wanted to walk with me and Vanna to Starbucks (in Downtown Saratoga). I had an empty bag of coffee beans from Starbucks, and if you bring it in to the store, you get a free tall hot coffee. Cha-ching, yes, please.

So off we went. First, we stopped by at the park on the way for Vanna to get some water (they have a doggie fountain). I never really got to appreciate just how spacious, green, and quaint this park is until today. Can you spot Michael and Vanna?

The flowers in Downtown Saratoga were so lovely today. I was trying to get her to look at the camera, but she decided that panting and looking elsewhere were more important.

Michael was trying to tell Vanna to look at the camera. She just looked at him and said, “I don’t understand what the heck you’re saying, man.”

Wow, Vanna. You are not photogenic when you’re tired, girl. ;P (hehe, I joke. I love these funny pictures of her).

We covered 2.4 miles and Michael got a free coffee out of the walk. What a lovely stroll!

We had Bible study and a huge El Pollo Loco lunch, and then Joe and I went to go get something cold to drink. Joe had a free drink card thing for Peet’s, so I got an expensive drink (caffe freddo extra bold). He’s always so nice to save those cards for me. 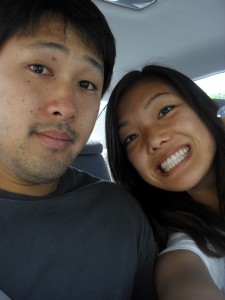 For dinner, we went to Chelokababi. It’s a Middle Eastern/Persian restaurant in Sunnyvale. We originally wanted to go to DishDash, but it was around 7:00pm and would have been completely packed.

We started out with the Humos and the warm pita bread comes with the meal. Dang, that hummus was definitely housemade. It really really tasted like BEANS. It was much thicker and beanier than other restaurant hummus. We got used to it and we were able to sweep the whole plate clean.

I got the chicken kebab dish and paid extra monies to get my rice all awesomed up (with currants and saffron). The overly-dressed salad with thousand island dressing was unexpected and unnecessary. The chicken was pretty good, but the small pieces were dry. But MAN, that rice was SO GOOD!

All in all, I wish the whole DishDash thing could have worked out. We’re used to the way they season things there (ha, from the one time we went) and everything was is always cooked perfectly. Next time.

After dinner, we stopped by at Paris Baguette to get some bread. I also ate some brownie that Esther made, with a big glass of milk, of course.

Yep. Too many sweets, per usual.

[Random thought: I know if I can just eat clean, I would have scary mean muscles. Since I don’t, I’m just extremely well insulated and overheat quite easily within the first minute of anything requiring physical exertion. Fat and muscle will do that to ya].

This morning, I got up early to do the P90X Chest and Shoulders video. I actually pushed myself to do the push-up moves on my feet, or at least start out on my feet until the form gets funk and then move to knees. I kind of surprised myself discovering that I can do several real push-ups with good form! I’m getting stronger!

Up next? I’ve still got lots of time and feel like going to the TRACK. Whaaa?

I’ll let you know how that goes maybe later on today (or you never know. I might suddenly just change my mind last minute and go for an easy run or walk Vanna).

Have a glorious Sunday, everyone!

One response to “Old(er)”