This trip was so much fun because Joe practically planned everything (and when I say “practically”… I mean “absolutely”). The best part? He knows exactly what I like so the surprises were spectacular!

1. Flight was supposed to have one stop but because he was able to talk to some people, and we were able to get a direct flight. Man, oh, man… that was a great surprise 🙂 (Boyfriend bonus points: 4)

2. He changed the resort to a different one whre we can get 75 bucks toward the restaurants at MGM. We ate at Nobhill Tavern and it was delicious! (Boyfriend bonus points: 3) 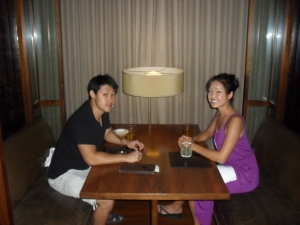 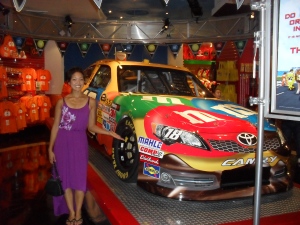 Just kidding. The real #3 surprise… see that lit up area on the Mandarin Oriental Hotel above Joe’s head in this picture? 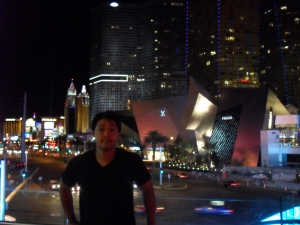 While we were walking the strip, I pointed it out and said, “That looks cool!” and I wondered if there is a bar or lounge up there… and how “the view must be super nice”. Well, it turns out that he already made reservations for that place!!!

^When we got there, we were both super thirsty. I ended up ordering this watermelon cucumber drink (nonalcoholic… since I was feeling dehydrated). It was the most refreshing drink EVERRR.

(It was a surprise the whole time because he pretended like he needed to go to the bathroom really badly and that we were just going there to use the restroom… but we walked to the lounge and they had a little table by the window already reserved for us. Sneaky guy. Boyfriend Bonus points: 7).

4. I had pointed out another place that you can see in the Cosmopolitan, saying, “Hey, I bet that place is nice to eat or drink at and the view must be nice.” BOOM… we went there for lunch!!!

Milos- at the Cosmopolitan- has a great $20 3-course menu. We both love Mediterranean food so this was right on the monies.

My Entree- Mediterranea bass… with its face covered (I don’t like when my dinner can stare at me and make me feel guilty):

Joe’s entree- LOBSTER linguine… or something (somebody needs to cover the lobster’s face):

The lobster came with some kind of black and green goop in its head, which is supposedly a delicacy. I’m always down to try new things and surprisingly, Joe was down to try this, too! We had to spread it on some bread though:

^Yeah. It looks kind of gnarly but it was quite tasty (very rich in flavor and tasted heavily of the ocean).

Course three for both of us was a Yogurt Martini:

That Greek yogurt was so rich and thick! Joe thought I would be disappointed that it didn’t have some liquor in it. I told him that I didn’t expect alcohol in it… although secretly, I was kind of hoping it would be some kind of fancy yogurt cocktail 😛  (Boyfriend Bonus points: 7)

5. We went to the Mix at The Hotel (next to Mandalay Bay) for a restaurant with a Michelin star. The decor was pretty and it was like 65 stories up.. meaning the view was fantastical.

6. The last surprise was for the show! We were supposed to watch Love at the Mirage, but Joe was able to find a good deal and changed it to La Reve at the Wynn! 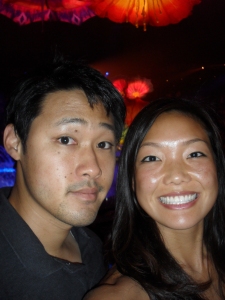 ^Mr. Joe didn’t like the show THAT much, but I did. I don’t really mind pretty dancing. He wanted more stunts and acrobatics that were super dangerous, hahaha. (Boyfriend Bonus Points: 6).

How does he know me so well? It has been almost six years since we started dating.

^This was the day after our first date. Look how young we were 😛

We met at church (through what may have been subliminal messages from our pastor. He was really fond of Joe and was always talking about how great he is… which made me think Joe was more that just a cute guy ;D).

We hit it off right away and talked for about 5 hours the first day and probably more than 5 hours the second day. 10 hours of talking and hanging out in the first two days and I knew this guy was someone who I would want by my side forever.

^BTW, I’m probably going to get in trouble for putting these pictures up. If you’ve been following this blog, you know that Joe usually looks like this in this pictures: 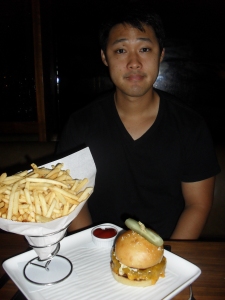 HEHEHEHE. Oh, well. He can’t be too mad.. it’s almost our anniversary!

So anyways… I was his first girlfriend, and he was my first boyfriend. That pretty much means that we were totally lame and celebrated every “milestone” in the beginning (every ONE MONTH. Do you know how much monies we dropped???). Of course, but the second year, we made it every three months…then the third year was every 6 months. Then we just did our celebrations every year.

(Picture from the photo booth at Susan and Russell’s wedding):

This year, the 6th year, was the best one so far! I don’t quite know how I ended up with such a good guy. He takes such good care of me and we laugh together all the time. Too bad for him, he’s with a girl whose laugh is piercing and glass-shattering… and I like to laugh at EVERYTHING.

We’ve definitely been through some thangs, and I’m so glad to have had him with me through all of it. God has truly blessed me with a wonderful man 😀

Bet you wish one of the surprises was an engagement ring, huh? ;P

Our actual anniversary is on September 3rd… so perhaps you will hear more stories about us until then.

I hope you had a blessed weekend!