It was a beautiful day yesterday for a RACE. Up at 5:45am and headed out to Joseph D. Grant Park for the Trail Hog Run. I hadn’t really done any actual trail running before this event (unless you count the 22-mile trail race from last month).

I had no real plans for this race except to keep it pretty easy in the beginning and then gun it during the second half.

It was nice to see the same trail I ran last year (and to see the half marathoners go off for a second loop somewhere else while the rest of us ran toward the finish line).

Uphills were pretty even-paced and there was only one segment when I power-walked up (about 20 seconds). The rest was all running. 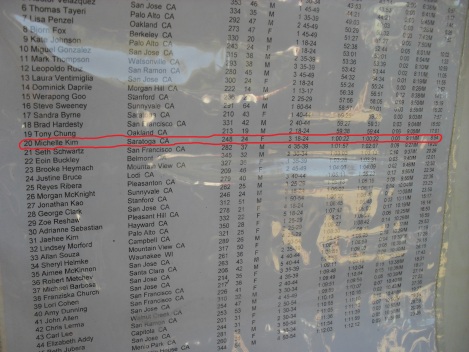 Ooh, luckily, I squeaked in for an age group medal: 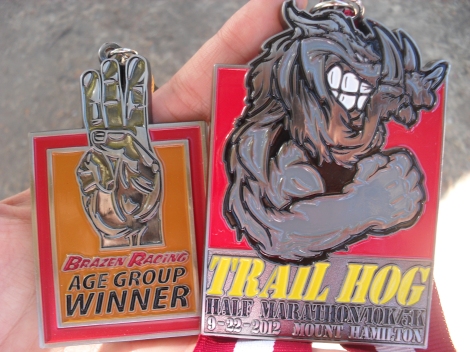 ^Pretty sweet age group medal, yeah? I was third in my age group (DUHH). I like the finishers’ medal, too. Super hardcore!

I was so glad to see my friend, Tammy (on the left) and to make a new friend, Shannon (on the right)! They ran the half marathon on these tough trails! SO AWESOME!

^(This is the fourth race where I have run into Tammy! Isn’t it amazing that you can make friends through racing? Run them enough and you’ll see the same people running at all these local races 🙂

What’s another great thing about races? The post-race eats!

I always enjoy the races by Brazen Racing because they start on time, have great volunteers, and they are super organized. They’re also usually cheaper than some other races where you’re on the roads a lot. Sign up for a local race NOOOOW. It’s seriously so much fun 😀

I went over to young adult Bible study right after and we were blessed with Rose’s breakfast burritos (thanks, Robin!!):

Okay. That was a super quick post. I need to study and get working on some paintings!

Hope you all had a fantastic weekend!