BEEEEAAAST MODE. Well, those chin-ups were freaking hard. Had it been two weeks ago, I would have given up halfway. I just kept pulling myself up as hard as I could to get through them. About 90 second rest between sets.

Plank variations: full plank to low plank, hip dips to sides, knee in (alternating sides)… this was all for about 7 minutes with rest in between eat exercise.

Beasts are allowed to whine about being sore and tired afterwards… just so you know.

Yesterday’s Women’s health studies class was so great! I even got a little sticker of affirmation:

At night, I had some awesome bonding time with my roommates:

It centered around tea, celebrity gossip, and… 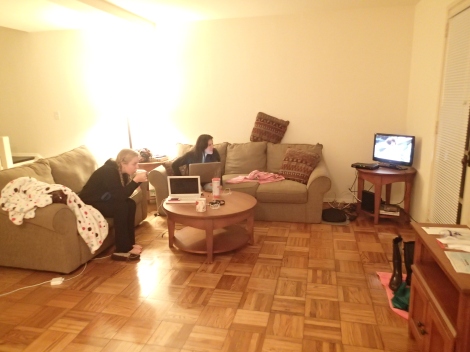 (We generally don’t make eye contact with each other anymore. Eyeballs on tv only).

That’s right. Our living room (sadly) feels more like a living room because we got the television hooked up! There’s going to be a lot of Christmas movies playing until the end of December. That’s for SURE.

I thank God for my roommates. They’re so sweet!

I’m so sore this morning. But the weather is so perfect right now so I’m going to go for another easy run around Lake Merced 🙂

Have a blessed Thursday!