Yesterday was so wonderful!

First, it started out with all of us in our pajamas. I’m here with Michael and my mama. 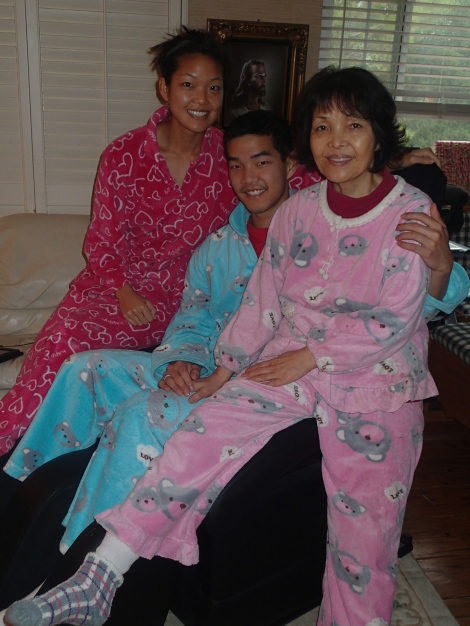 Later, we got dressed and went to get Thai food!

Unfortunately, I had inadvertently put my camera on  a mode that gives it some kind of special effects  and most of the pictures came out like this:

This was the only one that was normals:

So we had Panang curry, garlic and something seafood combination (^pictured), mango tango (pictured above), drunk noodles, and soft shell crab. Everything was SO GOOD!

We got back and watched all the Christmas NBA games and chilled with a bunch of snacks.

Then Joe came over and we watched some more NBA games, then went over to his place with VANNA!

First, it was time for dinner!

His mom is a fantastic cook and makes amazing Korean food. On the menu last night? Kalbi jjim and gae jang. There was also an awesome soba salad that is not pictured. We were all stuffed!

Then after opening secret Santa gifts, we played yoot.

^Vanna was trying to help them with their strategy in this picture. Hehehe.

The girls beat the boys super quickly. We should have played for something more expensive than pho 😉

Toward the end of the night, we laughed together as we watched Running Man.

And Vanna became such a well-behaved, chill dog when she became tired and sleepy.

BTW, I don’t know how Michael knew, but he got me tights that would keep me warm and they’re from ATHLETA!

He remembered how I was saying one of my tights (that should go down to ankles) was pretty short and my ankles were cold, so he thought these would be good for me. What a good younger brother! I’ll have to buy him lots of goodies when we go to Vegas!

Here are the details of what will be included in my giveaway:

1. Nathan water bottle with handle and pocket (great for running)

3. $25 gift certificate for Target (it’s where I get all my essentials and I figure you can find one wherever you are in the country).

Hope you had a fantastic Christmas!

One response to “Christmas Day Recap”