Our church left Tahoe yesterday, and I think we had an awesome time hanging out together in the cabins, playing games and eating good food.

On Sunday, Joe fulfilled his duties as my boyfriend and got dragged out to the snow in the morning to go snowshoeing with me.

This was the first time for both of us, and I- for some reason- was so excited about trying it out. 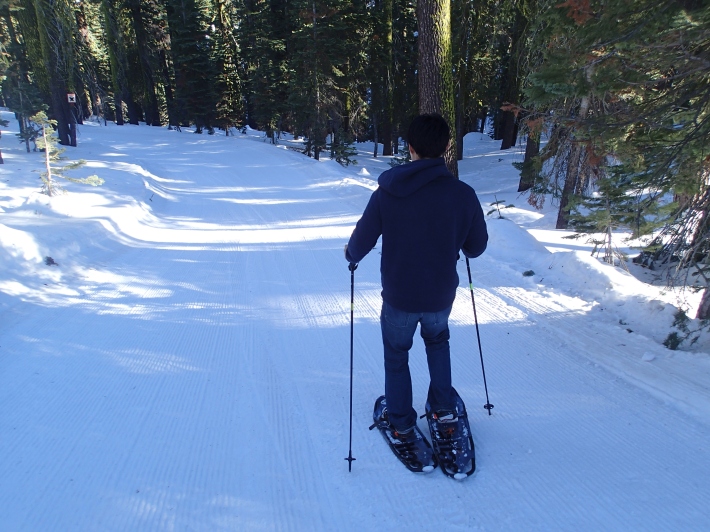 If you want to go fast, like a skier… just know that you can’t. 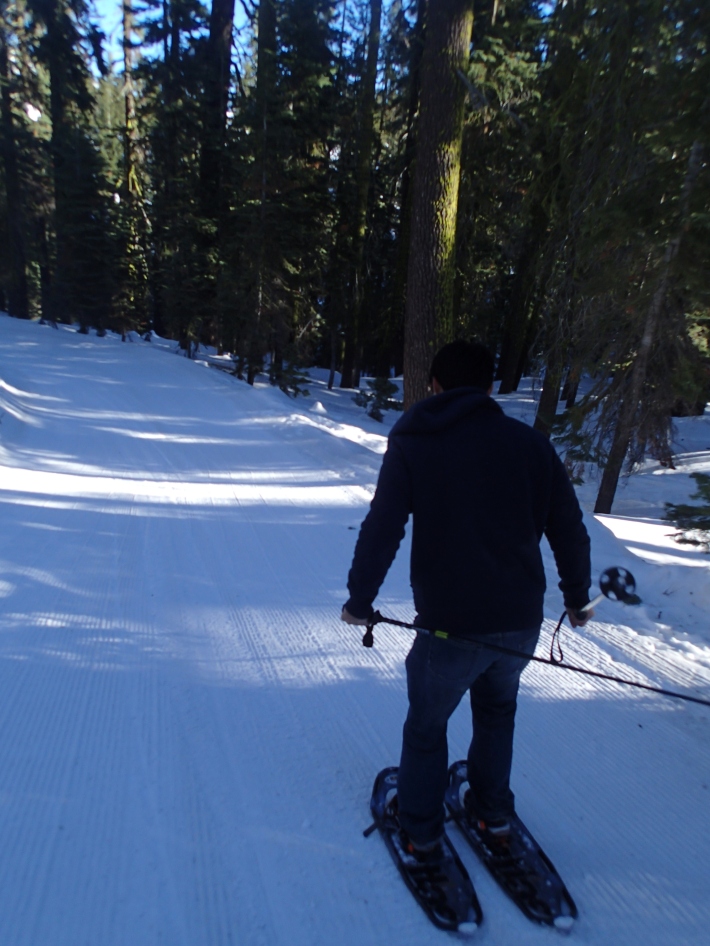 You’re going to look as silly as this guy^ who’s staying right there in place. Hehe 😛

It’s a lot like hiking, except with the snowshoes on your feet. BTW, we just wore our normal walking shoes and jeans… no fancy snow boots or anything. It would have been nice to have them in case the snow got into the shoes.

In any case, it was a beautiful day for a hike in the snow, and I was happy to get some exercise in. It was pretty freaking cold in the early morning, but we got warmed up pretty quickly on the trail.

I also ran into a Running Addict! She happened to be snowshoeing while her family skied. She said she recognized my LAUGH, hahaha.

Would I do this again? Well, the trail was supposed to be 3 miles and I think we only covered half of it before going back. One of the workers there (Sierra-at-Tahoe) actually weren’t even sure where the trail started and ended. BUT it was $25 compared to the $82 lift ticket (not including renting the skis and such), so I was fine with that.

If I had the whole day, I would have done some snowshoe-running, too. I tried it out and  you can definitely jog in those.

Anyways, I WOULD totally do this again if it was a longer trail, with views of Lake Tahoe or something crazy.

Anywho, we didn’t have the whole morning to be out there. There was an important ‘Niners’ game to watch.

Drank some beer with lunch while watching all the fans get WILD.

It was a heavy, sleep-inducing meal. I was so tired from the lack of sleep from the nights before that when we went to Harrah’s, I took a NAP while leaning on Joe’s shoulder. Who know boulder shoulders could make for a comfy pillow?

Dinner was LOCO MOCO, prepared by a Hawai’i-loving couple, Tom and Addie! 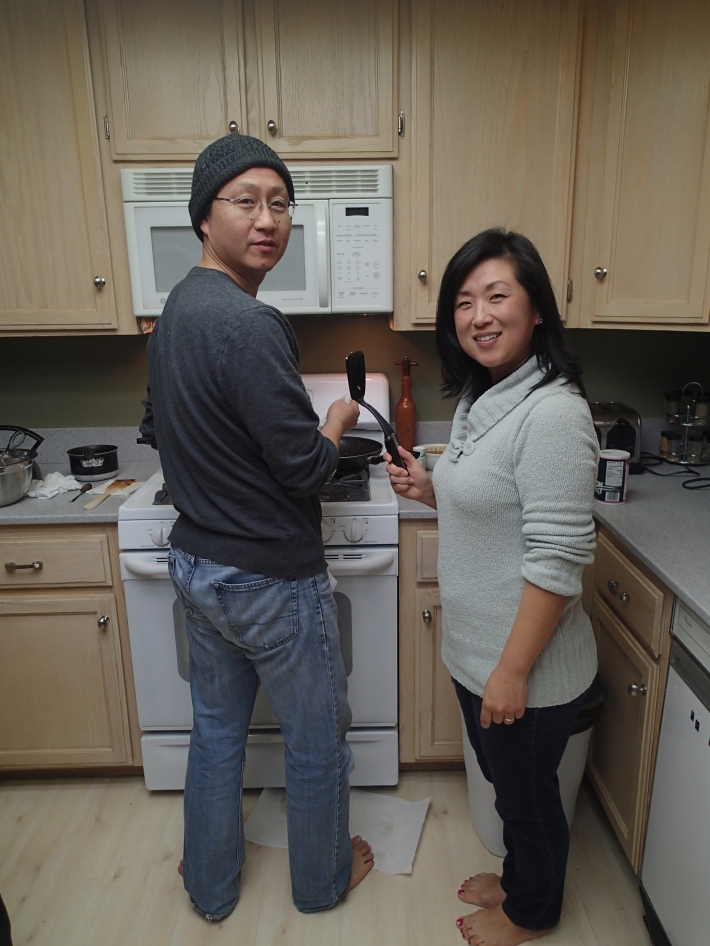 You best believe mine had two eggs on top of that beef patty! The caramelized onions were amazing, too!

And after service, we had Safeway desserts!

Other good eats? CURRY RICE with awesome bacon cabbage on the side:

And Joe and I hung out with Jane and Steve in Heavenly Village. It was so fun to hear their stories and learn a new game from them! 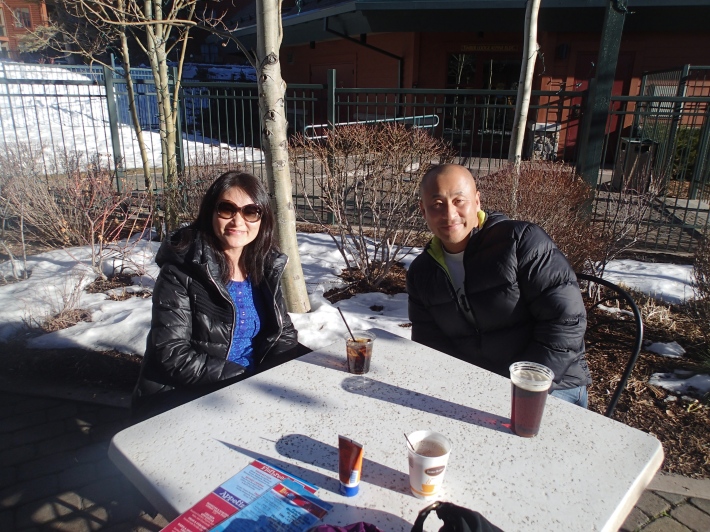 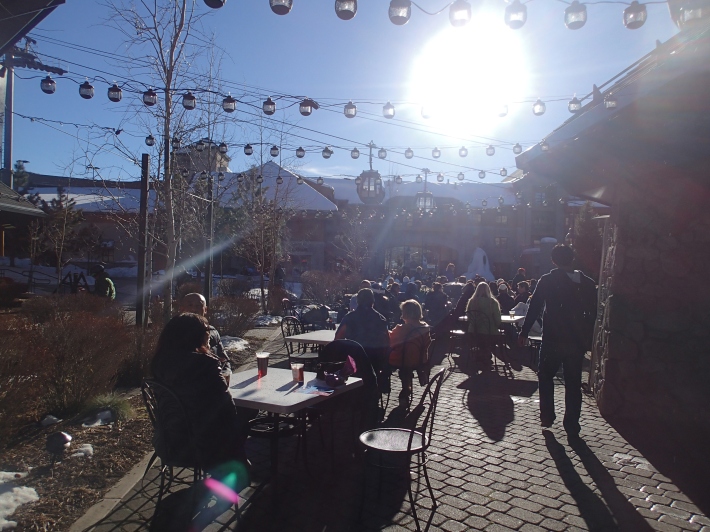 As you can see, there was a lot more indulging and eating heavy foods than there was eating healthily and exercising. OH, WELL. I figured if I just get back to my normal routine on the weekdays, it’ll be okay. How often do we go to Tahoe anyways? (Haha, actually, we go pretty often!)

There were a LOT of second helpings of things, trans fats in those desserts, huge portions… but as long as my normal routine isn’t going to continue in that way, then I figure it isn’t the end of the world.

Going to watch the Biggest Loser while cardio-ing this afternoon!

Hope you all had a nice MLK weekend!