I don’t know how it happened, but I scheduled in a lot of races for the month of May.

Having just run a full marathon (BSIM) this past weekend, I should actually be taking it easy for a while. No, I did not race it, but I think all of those hills (~2,000 ft elevation gain, and even more elevation loss!) over the course of 26.2 miles can lead to some wear and tear.

Also, for the whole week before the marathon, I kept myself busy with schoolwork, so my workouts were kind of nonexistent AND I was eating like crazy. I ran the Big Sur marathon much heavier than I’ve ever been. I think a lot of it just has to do with the bloating from tapering and carbo-loading.

Monday was a complete rest day. I did some walking around campus, walking up and down the stairs at my school house (because I had to… not because I wanted to), and rolling everything out with the Stick.

Yesterday, I woke up feeling slightly less sore. As I walked around to all of my classes throughout the day, I was able to feel the soreness go away. Must be all of the fresh blood getting pumped to where it needs to go. So I decided to go to the gym. I hadn’t been in the gym for almost two weeks!! It felt nice to be back.

I tried to stick to the non-impact cardio stuff. I did 10 minutes on an annoying elliptical. It had a hitch and when I tried to increase the resistance, it would get worse and worse. Blech. Then I got on a spin bike and sweated and got to get the blood flowing. Did that for 30 minutes, but got a little bored with the Warriors v. Nuggets game (I like it when it’s a close game).

Probably should have just walked back home, but all of the treadmills were available.

Since that almost never happens, I hopped on and did a slow EASY RUN at a couple different paces that were slower than my normal warm-up paces, finishing 2.25 miles in 20 minutes.

When I got back home, I was starting to feel my hip flexors getting sore/tight/something weird. I decided to do some yoga in front of the TV. Good LORD, it was exactly what I needed! I never realized how many hip-openers and stretches there are for the hip flexors. Also, my calves were super tight in the beginning, but after 25 minutes of yoga-ing, my hip flexors and calves felt awesome.

Maybe I’ll be one of those runner yogis. Yoga runner? Whatever it’s called, I can totally see myself following every run with some nice yoga 🙂

This weekend, I have the Brazen Western Pacific Half Marathon. I will not be racing this, but PACING the 2:10 pace group!

The first time I paced a race was last month in the Santa Cruz Half Marathon. It was so much fun and I can’t wait for the one this Saturday!

Then the following weekend, I will be running the Mermaid Run Sirena 18. Yup, an 18-miler! I have run this one the last two years and enjoyed the distance. It is tough, but it is not long enough to feel hit the wall. 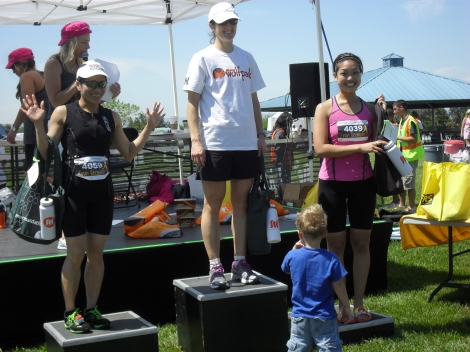 ^This is where I met Tammy for the first time. She beat me out for the second place spot last year!

So after the Sirena 18, on the very same day, I will be doing a 5K. Some kind of Rave Run business. It will serve as my shake-out run. Definitely going to be crowded and something to do for fun with my church homies.

Two weeks after that, Joe will be graduating from law school, and I will run the M2B Marathon in Ojai the following day. This was going to be the race where I would try to PR, but I now realize that I may definitely be burned out by then. If that is the case, I will have no problem just enjoying the race without actually racing it.

Then again, I paid a lot of monies for that race, and since I don’t run many full marathons, I should probably try to go for a PR. By God’s grace, I will not get injured or completely pooped when it comes time to run it!

Too many races? I’m not sure. I think it will just have to do with me being smart in between all of these runs and making sure I recover and get good rest.

How many races do you run each month?

Are you one of those weekend warriors who run a race every weekend?

How long do you give your body to recover and rest after a marathon?

12 responses to “May- The Month Of Too Many Races?”