The weekend has been pretty busy so far!

On Friday, I went over to Joe’s after class and we went to the gym to workout.

I don’t know if it’s the heat or something, but I ran what was supposed to be an easy 5-miler on the treadmill, but it 7.1 mph felt like 8.1 mph. Goodness. I was so happy to be off of that thing.

Went on the rowing machine for like 2.5 minutes. Loved it! I should incorporate it more into my warm-ups, since it pretty much gets the whole body working.

Then we went to church at night for sisters’ and brothers’ accountability and prayer group. Noel led the study for the sisters about Godly Womanhood. It was awesome, considering how most feminists get super angry/upset about what the Bible appears to be saying to women.

Fast forward to Saturday morning, and I’m up at 5:30 am to get ready to pace for the Western Pacific Half Marathon in Fremont. This race was put on by Brazen Racing, and it featured pretty much every distance: 5K, 10K, Half Marathon, and Full Marathon.

The Running Addicts were pacing the half and the full. Major props to those who paced the full marathon. It was like a million degrees out there (or maybe high 70’s or low 80’s? I dunno). BTW, many of these photo creds go to Linh! 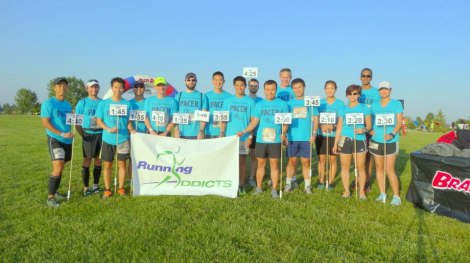 So as a person holding the pace group stick, people will ask you some questions. Here are some FAQ’s from yesterday:

A: “9:55.”  [Each of us had a pace band with not only the pace, but the mile splits. If we do not get one provided for us, we just Sharpie it on our arms or find other creative ways to make sure we have it].

A: “I am a member of a Bay Area running group called The Running Addicts. The group gets asked to be pacers for many of the local races.”

Q: “Is it hard to run with the stick? Doesn’t your arm get tired?”

A: “No, not really. It’s actually really light and I stop noticing it’s there after a while. I assume it would be a little harder for a full marathon or if it was really windy.”

Q: “So does this feel like just a warm-up for you?”

A: “Well, to insure that the pacers can get in at their pace times, we are put into a pace group that is much slower than our race pace.” [Which pretty much is just saying “YUP”]

Q: “Do you just run at that pace and know it, or do you have to keep checking your watch?”

A: “I constantly have to look at my Garmin and adjust my speed accordingly.” [In races, I have that desire to pass people, which makes me pick up the speed a lot… so I just had to rein it in]

Q: “Are you on pace?” [Asked frequently during the race]

The common theme of my presence in the last three miles… as soon as they see me approaching or passing them, they’d say:

“I knew this moment would come eventually.”

I gotta hand it to all of these finishers. It was a pretty warm morning, and the trail got pretty hot and dusty.

Also, if it were not for the wonderful volunteers at each of the aid stations, we would have all turned back into dust out there. Always thank the volunteers! They (men, women, young and old) are out there early to prep the tables/stations, and probably get one too many Dixie cups of sports drink dropped on their shoes.

Yesterday, I had someone who was able to stick with me for the ENTIRE RACE! That almost never happens!

She was so nice, kept me company, and worked her skinny legs off to stick with my pace to the very end! She told me later that she is pretty sure that she PR’d by about 40 seconds (or something like that). 😀 ISN’T THAT AWESOME? 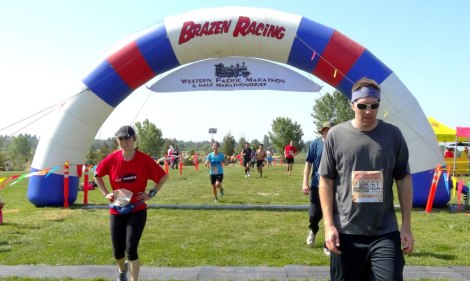 I’m sort of glad you can’t tell how unbelievably sweaty I was after this race. I also became a few shades darker, haha.

All-in-all, I enjoyed pacing this race, and I’m so glad I had to opportunity to be a pace group leader. I guess this course was also really good for pacing because it’s pretty much FLAT.

GREAT JOB TO ALL THE RUNNING ADDICTS PACERS!

Next pacing gig? The first half marathon of the SF Marathon + Half!!!

After the race, I stuck around a little bit to wait for some of the marathon pacers. Again, I was astonished at how accurate their times were, and for being able to make it through 26.2 miles of dirt/gravel paths to get within SECONDS of their pace times!

Then I drove down towards San Jose and stopped by at a Starbucks to change and get an iced coffee. Again, it was le freaking chaud. HOT.

I went to the park where there was a celebration for Eliyah’s 1st birthday! Russell and Susan hosted this nice party at the park for their cutie pie daughter: 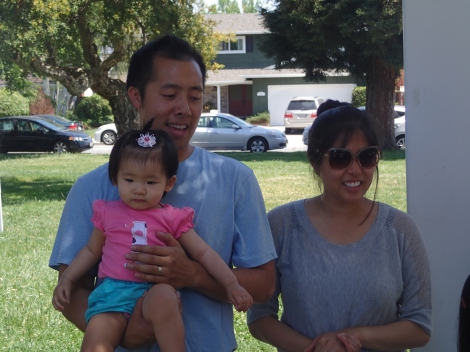 They did the Korean 1st birthday tradition (dol) where she gets to pick between several objects, indicating what kind of future the baby will have. the dollar means she’ll be a financial guru (or rich), the ball means she’ll be an athlete, the book means she’ll be an intellectual, etc. We all had a chance to guess what she would pick, and I guessed the book.

She picked the book!

And oh, man. There was so much food at this party! 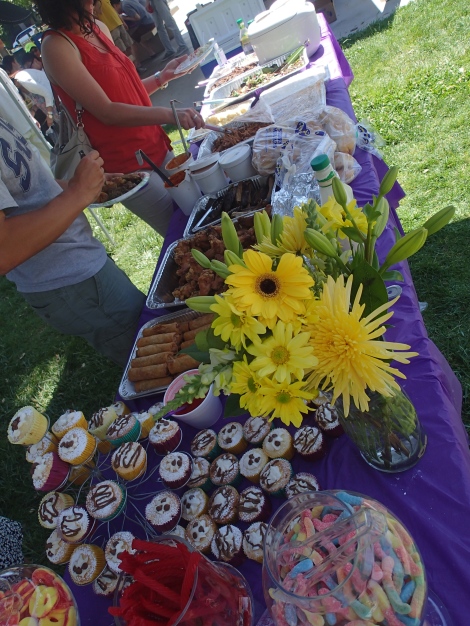 In fact, I got to take home a couple pounds of fruit and soba noodle salad. It was super yummmmm.

I also got to see Urijah, who turned one year old the day I ran the Big Sur Marathon.

Actually, he was pretty much walking around everywhere the whole time. He even kept walking toward the other kids playing volleyball because he was pretty sure he could school some fools.

I can’t believe Urijah and Eliyah are already a year old!!! I still remember the first day when I got to meet up with Noel and Susan when they just found out about the pregnancies. CRRRRAAAZY how time flies!

Happy Birthday, Eliyah! You are incredibly loved and blessed to have such amazing parents and a bazillion aunties and uncles who will just want to spoil you! 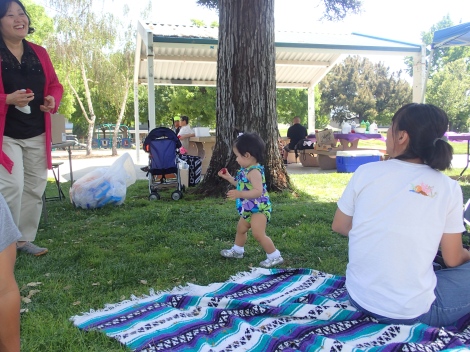 ^(She was super happy to get that strawberry, HEHE! So cute).

Today, I will be churching, and maybe running at the gym, and then dinnering with some church folk. It will be another long day, but a good one. 🙂 I can tell

Hope you are enjoying your weekend!

3 responses to “Pacing the Western Pacific Half Marathon”