Okay. Let me recap the Mermaid Run (Sirena 18 mile) for you.

It started off like any morning where I wake up before 6 a.m. to get ready. BUT THEN, things happened.

My family was sleeping I didn’t want to wake them up by grinding the coffee beans (which I usually grind the night before, but I forgot). I had green tea instead. First time doing that.

And then instead of my usual race-day attire (pretty much always the same pink tank because it has pockets in the back to stash my GUs and keys), I wore a blue tank. First time doing that. First time not taking my own GUs.

And then… I got to an aid station around mile 6. They did not offer GU, but only had the Powerade gel stuff. First time having this in a race.

Immediately when I ate it, it made me feel queasy. The texture was incredibly watery and the taste was like medicine. Two minutes later, I yacked. First time throwing up during a race.

I think that was around mile 7? I’m not sure. All I knew was that it was too far to run back to that aid station for water, so I just kept running. That’s when I started to feel like crap. It was getting warmer and I started to feel really dehydrated.

Linh’s picture says it all: 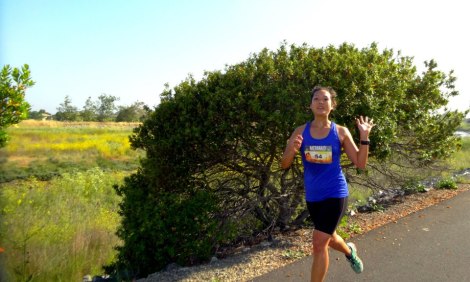 Hahaha! I think this was a little before mile 9, meaning I was not even halfway, and already it felt like it was the last two miles of the race. That was a first.

But here’s the cool part. After the turn around around mile 11, as I made my way back to the Quarry Lakes, reinforcements came in!

They were there to help all the RA’s stay strong and keep chugging on. Even if I seemed to have been exhausted and complaining (I think I was a little bit freaked out about having thrown up… since it never happened to me before), I truly appreciated their encouragements! Also, for much of the race, I was running by myself and had no music. Boo. So boring. It’s so much more fun to run with friends 🙂

Ron was nice enough to pace me for a few miles. I tried to just keep with the 8:30 pace he was setting, but I got toooooo pooped by mile 15 or 16. At this point, I wasn’t looking at my Garmin at all. I just wanted to finish. 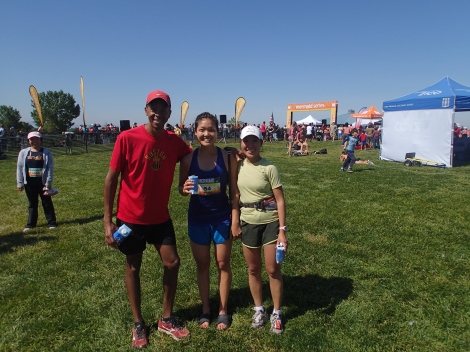 Thank Jesus, I finished (somehow, I was able to finish strong at the end!).

But then, I felt super duper light-headed, seeing spots everywhere, and almost in a state of euphoria (not the runner’s high feeling. It was something kind of scary). “Oh, crap. I’m dying.” First time feeling like that after a race.

I grabbed a water and slowly walked to my car. I was laying in the back seat for just a bit. “At least if I pass out, I’ll already be laying down. Someone will find me.” But the feeling passed, and I was able to get up and walk back to the finish area.

Oh, coconut water. You have never tasted so freaking amazing before: 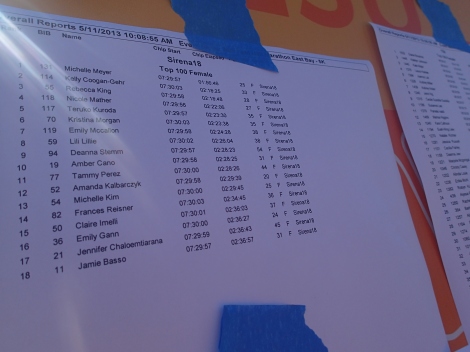 Tammy finished in 11th place and FIRST in her age group (she always does :D. She is an incredibly tough woman!).

I don’t feel too bad about the 4th in age division… if you look at the top 4 women who finished, 3 of them are in my age group. I miss being in the 20-24 age group. Everyone gets faster from here on out… I gotta step up my training.

Anywho, great job to all the finishers, and thank you so much RA pacers/cheerleaders/superheroes. We couldn’t have done it without you!

Overall, even though this was probably the crappiest I have ever felt in a race, I think I learned a lot of things from this experience:

1. Always test out the clothes you’ll wear on race day… or for me, I should just stick to what has worked in the past.

3. Always test out whatever fuel there will be on the course (avoid Powerade’s gel… at least for me. It just does not work).

4. If all else fails, have your awesome running friends come in to help you through those tough miles and give you an energy boost.

5. I’m considering bringing my own hydration stuff to my races… maybe just a little one in case I need it.

6. I need to stop being a DRAMA QUEEN and just buck up 😛

I went to Joe’s to eat lunch, take a nap, and then watch the Grizzlies v. Thunder game. OMG, it was a great game! So close, pretty much throughout the whole thing. If it was any other game and it was not that close, I would have just fallen asleep. This game kept me engaged the whole time!

Then I made my way to the Santa Clara County Fairgrounds for the Rave Run! 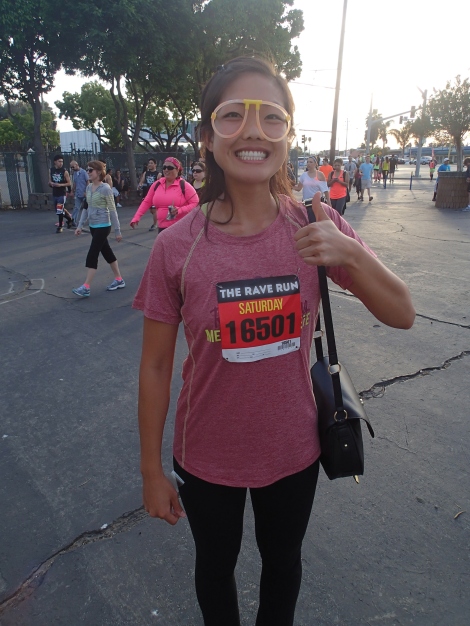 I tatted up my younger brother while we were waiting. It was pretty fun, haha:

Then Chimi and John arrived:

And we were waiting and hanging out together to pass the time.

I also ran into Hannah (I used to be her Sunday school teacher when she was in middle school AND in high school). Now she’s all grown up and it makes me feel super old. 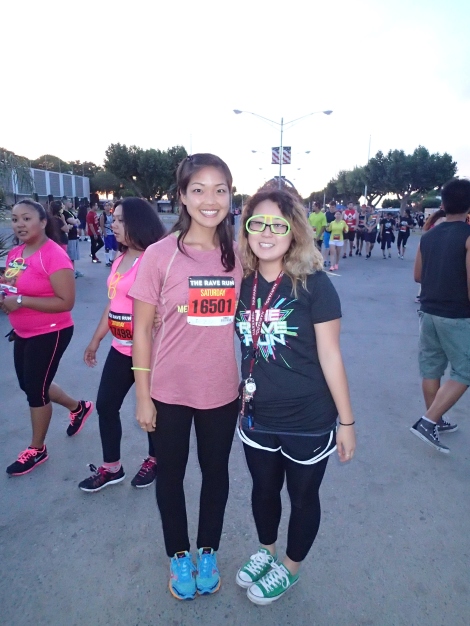 We waited for it to get dark. Pretty much keeping each other company and standing there for over an hour:

And it finally started to get dark… and really really crowded: 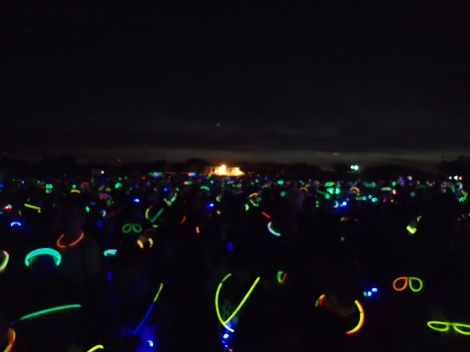 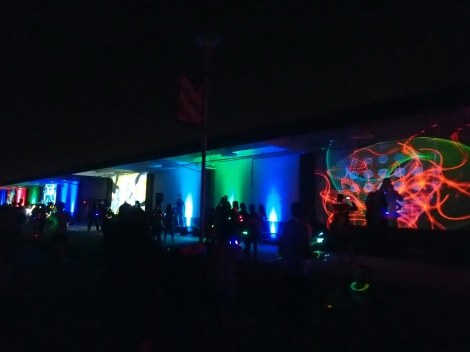 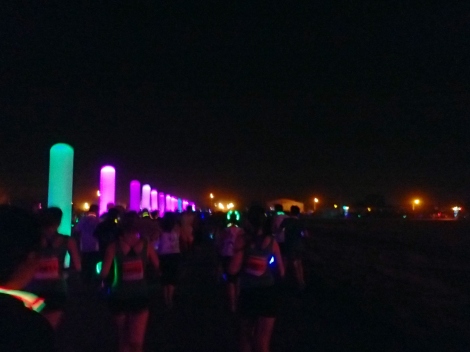 But the finish line was waaaay too backed up to actually go through (people were all clogged in there, taking pictures with each other and stuff). Chimi and I did not care about taking a picture in there, so we went around: 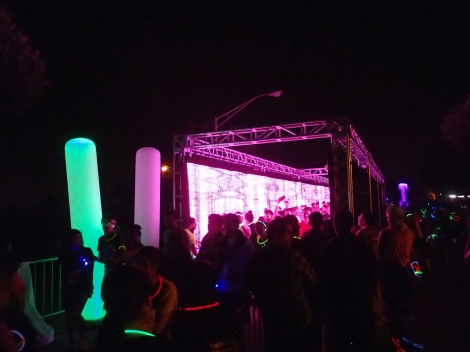 We hung out on the bleachers a bit, grubbing on McDonald’s and some food truck banh mi.

Actually, I wasn’t really grubbing because I had some bad allergies. I think it was all the dust from the course. Oh, well. It was like 10:30 p.m. anyways. Later, Jacki, Jonathan, and Stephen joined us:

Doing a night-time run was a first. Would I do this again? NOPE. It was a nice fun run (one of those gimmicky ones that can be fun to do with friends). It was something that was nice to do just once, but I kind of hated how crowded it was. Also, they started the race about 40 minutes after they said they would. I know it’s not a real race, but c’mon… forty minutes??

At least I got some cool pictures out of it 😉

Needless to say, it was a long day. I slept pretty well except for waking up super early to make breakfast for Mother’s Day. I woke up Michael to help me. He made those pancakes in a daze, said “Happy Mother’s Day” and went back to sleep. Hahaha

And why did we do what 10-year-olds do (according to Joe)? It was reminiscent of what we did as kids AND… we have no monies. Haha. I think she appreciated it:

^Followed this recipe to make the buckwheat pancakes. Added bananas to make them sweeter. Added jam instead of syrup because we’re a jam-type of folk.

Mama was curious how we made it. My parents were able to tell it was super healthy, but still really yummy.

What is the worst thing that has happened to you in a race?

Do you like those “gimmicky” races (such as ones with obstacles, the Color runs, the rave runs)?

12 responses to “Well, That Was a First”