Yesterday was a pretty darned exciting day. I got to run the Double Road Race SJ and represent the Running Addicts with my fellow RA’s!

The morning started out pretty early. Wake up early, get to San Jose by 6:30ish, get my bib on, and hang out with the RunningAddicts until it was almost time to start.

Then my strategy turned into keeping up with Tammy and Michael: 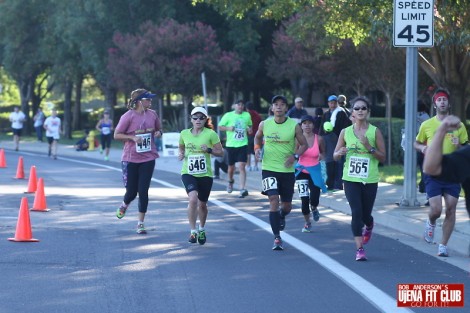 ^It was kind of awesome for the three of us to stay together like this. I felt like we were all pushing each other to work hard, but at an effort that is sustainable (or just barely sustainable).

The 10K course was a double loop. Each time, we came to a formidable hill:

Or perhaps they were just speed bumps. In any case, any hill kind of sucks when you’re trying to go at 10K or 5K speed. I think if this was during a half or full marathon, it would be fine.

But I would just tell myself, “Earn the downhill, earn the downhill” as I went up that hill. As much as I wanted to stop and walk, I had to keep up with Tammy and Michael (garsh, they charged up that thing with ease!).

We only had 1.2 miles to go, so the pace sped up quite a bit. I didn’t look at the pace we were running in that last 1+mile because I was too busy breathing and feeling the soreness in my arse (I did a stupid thing and did a pretty tough workout the day before. My butt and quads and shoulders and back were all super sore).

I was so pooped after it, and we went into the recovery zone to grab some snacks, water, and foam roll. 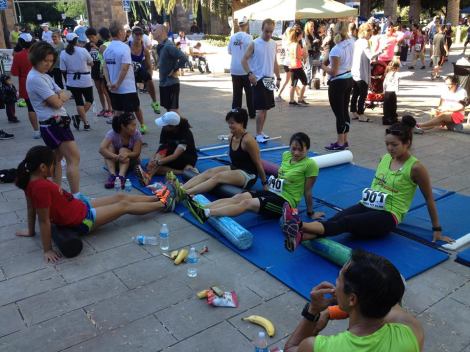 This is the part where I realized that it’s nice to have a running group to meet up with. I’d have been super bored if I was there by myself (during the halftime, anyways). 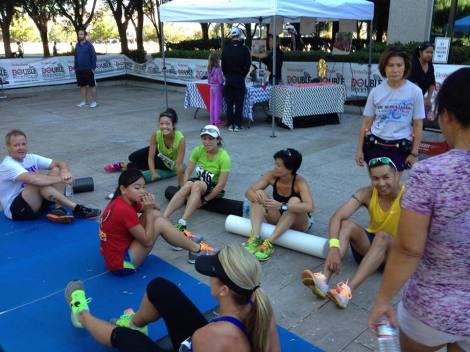 (Photo creds go to Bernadette, who lived nearby and just came out to support the Running Addicts, to cheer and snap pictures of us :D)

Right after the 10K leg, I was in no mood to do another race… but after this down time and recovery, I felt like I could at least be running out there.

I didn’t know if I could PR, but I was hoping to run a pace that would be faster than the 10K. For the 5K course, we did one loop around the same course. Yeah… it would be the third time seeing that darn hill (again… it’s not much of a hill if you’re going slowly… but it sucks to run it in a short race).

Unfortunately, I had to leave a bit early and could not stick around for the award ceremony… I had a test I had to take for school (in SF). Found out on Facebook that the Running Addicts did amazingly as a team! So many people got AG (age group) medals.

And lookie what we have here:

Tammy was thoughtful and kind enough to have me hand over my bib (in case I won anything). I got 5th in my AG and got a second medal (the small silver one is the finishers’ medal and the big gold one is an AG medal!). Double road race= double medals!

I don’t really ever care about finishers’ medals, but I am so happy to get this AG medal (even if it’s for FIFTH, I don’t care).

BTW, Bob Anderson is the founder of Runner’s World magazine and he was there as part of the organization through Ujena Fit Club (which he also founded). He is 65 years old and beat me in both legs of this double road race. Holy moly, he is fast! And he is someone who always supports the idea that anyone can (and should?) be a runner 🙂

I believe the same message, too. So many people are inactive, but just start making small changes to your daily routine, start slowly, and build up to running. Or join a running club. There’s a lot of free ones out there where you can find support and encouragement (for me, it’s the RunningAddicts!).

Would I do the double race again?

Ask me in a year.

After my test yesterday, Joe and I went to Wing Lee Bakery to get some dim sum:

A huge lunch for both of us came out to 11 bucks. Love that!

Then had my current favorite dessert… AVOCADO SMOOTHIE:

And then in the evening, some of our church young adult group went out to Red Robin to celebrate John’s birthday! 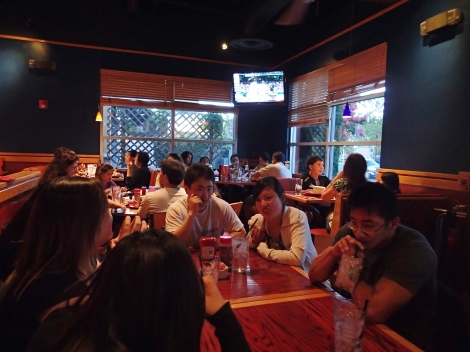 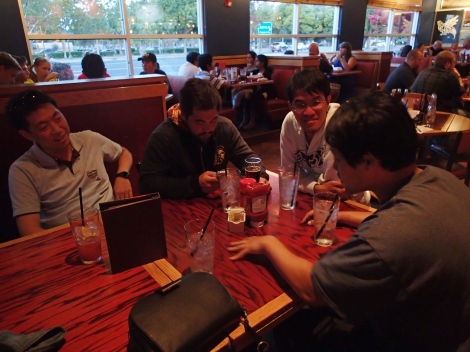 ^Joe on the right is talking about basketball, haha.

And I played around with the romantical setting on my camera:

^My dentist loves me because I have a huge mouth and you can see all my teeth pretty darned easily.

I had the turkey burger (surprisingly good!) with cole slaw (since everyone else got fries… of which I may have eaten several, hehe).

And there was ice cream cake! 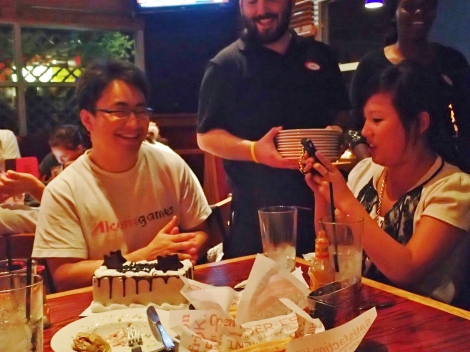 Ever done a double road race? Or races on back-to-back days?

What is your favorite kind of cake?