Okay. I know that some of you think it’s crazy to have to wake up early (like… 5:00am… 4:45 am?!) to go somewhere for a race or a run. What’s even more crazy is that there are people who have to wake up even earlier than that to get there way before you to make sure everything is set for the race.

Race coordinators are pretty much pro when it comes to getting up early (or perhaps not sleeping?). Then there are the volunteers who are out there super early as well!!

This was the earliest that I have had to wake up for a race. 3:35am. I tried my best to sleep early, but it’s not like I would really be able to see the difference between 4.5 hours and 5.25 hours, haha. Thank God for giving us coffee.

Anywho, I woke up early on Sunday morning and arrived in Santa Cruz by 4:45am, which was the start of the volunteer shift. There were triathletes coming in to the transition area at 5:00am, so we needed to be briefed on where they would be “swimming in” from, the “bike out”, “bike in”, “run out”…

I think I was standing there cross-eyed for like an hour until I finally was able to visualize the course and where they should be going from the transition area. Good gravy… the logistics for tri’s are WAY more than for a simple race.

The Running Addicts started off with body markings: 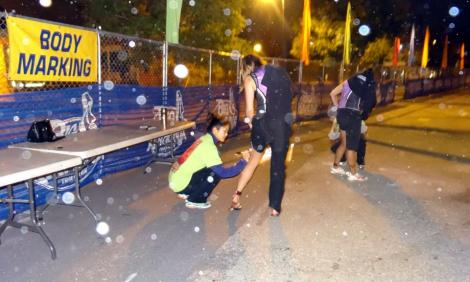 (Thanks for the picture, Linh!)

We got to write their numbers in four places. It was pretty fun, haha. It made the time fly by! And the only special one I remember was a request for me to draw a birthday cake because it was his birthday. He and the friend were super impressed by my birthday cake drawing (I’m good at it because I draw it for work on one of our “rule cards” all the time, haha).

So after an hour or two of body markings, they all went out to do the swim portion and we were in the “run in from the swim” portion of the transition area.

It was cool to see the people running in from the swim leg of the tri. I had major respect for these incredible athletes. They swam 1.2 miles, ran in about a quarter mile to the transition area, and then had to do a quick switcharoo to get on their bikes and git. Git going to ride 56 miles o__O. And I guess there’s different strategies for the transition parts, but definitely, the first guys who came in were in and out of there in like… 45 seconds (exaggeration? I have no idea).

The Running Addicts had a couple teams who did the relay. It was really cool to see it all go down. I was so excited to see them accomplish this tri as a team!

Also, I was glad we were out there to represent the Running Addicts:

^This is not everyone. There were many more out there on the course or doing the relay.

Surprisingly, the 5+ hours flew by! And when the shift was over, I went for a short run with Amy: 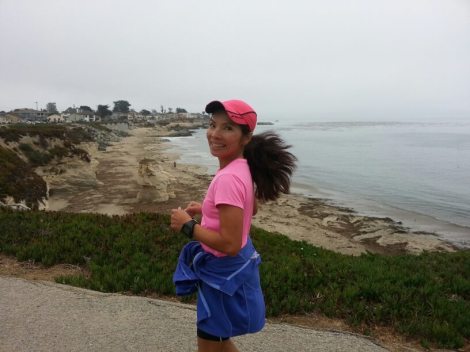 We saw the triathletes running out there for their half marathon leg (meaning they had already completed the 1.2-mile swim and 56-mile bike ride by that point). CRRRAZY.

4 miles were done, and I headed off to church!

I would totally volunteer at another triathlon, as long as it is well-organized. I don’t know why, but because we had a few different duties, the time went by quickly (or perhaps it’s because I was surrounded by my awesome running group members :D).

And I have MAJOR respect for triathletes. It’s pretty freaking incredible what they have to do to train and finish all three events. If runners complain about blisters and chafing, I can only imagine what a triathlete will have to go through (swim cap coming off, getting kicked, sand all over the place, flat tire? As well as chafing and blisters).

Anywho, I will maybe consider doing a smallish, non-competitive tri next year. Amy told me that many of the Mermaid series tri events are short and beginner-friendly… which is good because I’ll be out there crying before the swim leg and riding my pretty mountain bike for the biking leg. I’m good with the running, I think.

Have you done a triathlon? (I know this MichelleK has done a few 😉 )

What is the earliest time you had to wake up to make it to a racing event?