Sitting for a long duration of time is not my jam. I get antsy, and I lose focus.

Well yesterday morning, I tossed and turned all night, then couldn’t go back to bed around 6:30am, so I got up and studied for two different physics exams.

Then, my eyes started going cross-eyed (when I’m tired out of my mind), and I had to do something to help relieve the stress and crap… so I went to the gym.

Surprisingly, the gym is pretty empty in the morning! Maybe next semester, I’ll start out the day with early morning workouts? Perhaps.

30 minutes of cycling, listening to different kinds of music to start on a playlist for the Spinning class workout. As you know, I attended the class for certification, and I really can’t wait to take the exam and get officially certified (which I’ll do after finals… since it involves studying just a little more).

Took the physics lab final and got owned.

Then studied for an hour before taking the physics lecture final. Got owned yet again.

Physics is just not my thing. I am also a horrible test-taker, so I ended up blanking on how to even get started on problems that we did from the beginning of the semester.

“OMG, what’s the equation for getting the y-component?” “Which equation do I use to figure out the initial velocity if I am not given the time and blah blah blah???”

So sad. Hoping that the instructors will curve it…

Kind of super duper sad how I was asking God why He didn’t make me smarter… or at least more disciplined. Oh, well. I’m pretty sure I can bring Him glory without being smart. I HOPE.

ANYWAYS… I had a cool outing with Joanna planned for yesterday evening. We were both not done with all of our finals, but she is leaving for LA tonight, so last night was the only time we could do it.

What’d we do? Super touristy stuff… like hitting up Union Square for the lit up Christmas tree:

Before that, we put our names down at Cheesecake (might as well. We were going to be exploring the 6 or 7 floors of Macy’s) and walked around. Got lost frequently… it’s so big. I think they do that on purpose so that you have no choice but to look around at what’s there.

After about 45 minutes, they had a table prepped for us, and we sat down and ate a bunch of yummy brown bread.

I may or may not have suggested a mojito for both of us.

Those mojito’s were expensive, so I was sure to chew the ice, drink every last drop, and eat the mint leaves, too (most of them anyways).

Joanna ordered the orange chicken (“Michelley… should I get white rice or brown rice?” “Brown rice. Hope it’s not all hard.” <— since most places often don’t cook it right and it comes out slightly undercooked). 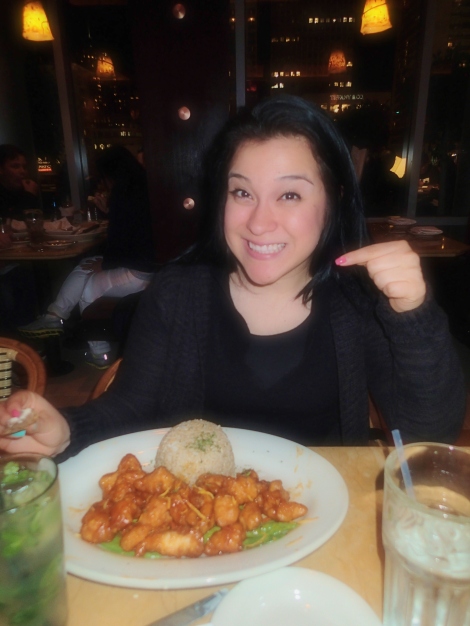 And I ordered the Pear and Endive salad… which meant I could go bonkers on more orders of bread and butter:

We beasted and then went down to take some more pictures of the lights and decorations: 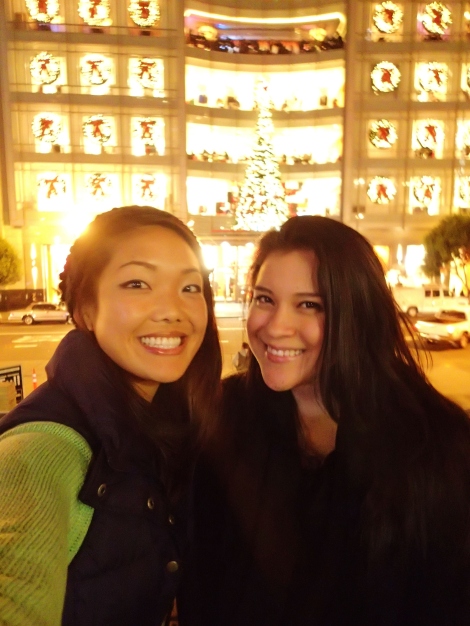 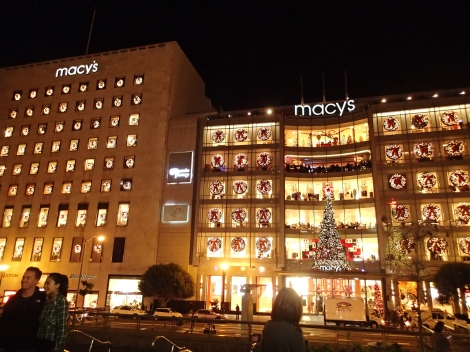 And our night would be incomplete without some fro-yo. Went to Yogurtland this time around: 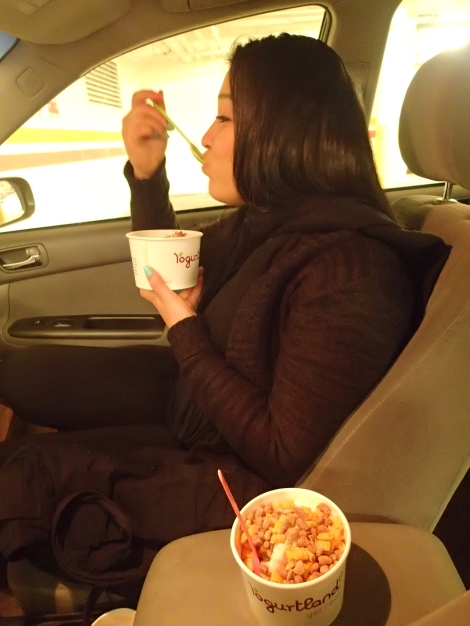 The outing last night was just what I needed. I’ve been studying for a few hours today already. Writing this post was a nice break… and now to get back to it all.

I’ll probably take another break at night and go to the gym for a sweat session.

What’s the biggest shopping mall/place in your area? (Union Square… and the Westfield mall out in SF are pretty huge).

What’s one way you take a break during the day? (Diving into a bag of chips. Or exercise).

4 responses to “Taking a Break”