In our Sports Psych class, we are studying about sports and exercise for children and adults, as well as exercise behavior and adherence.

We are almost 4 months through the year 2014, and many people who had big, awesome goals and resolutions for the new year have forgotten about them because… it’s no longer January, haha.

There is also a big problem with sedentary people who join a gym in hopes of losing weight, getting healthy (quite general), and reducing their risks of cardiovascular disorders (doctor’s orders). These are all extrinsic reasons. There is a simple intrinsic reason that has been found to keep people in an exercise program longer. Any guesses? 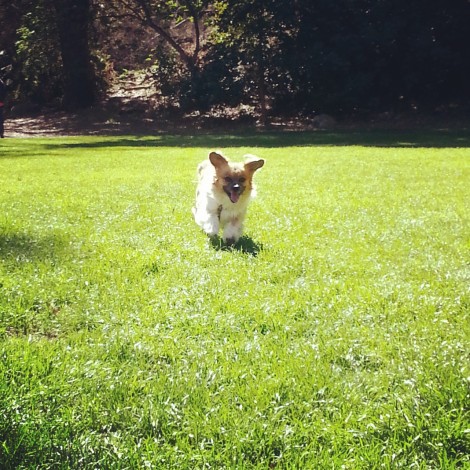 ^As Vanna shows here, you have to have FUN! You have to get ENJOYMENT out of it!

So enjoyment/fun is actually the biggest intrinsic motivator for kids and adults (more so in kids) that will keep them in a sport or physical activity for the long haul. Sure there are other intrinsic factors like learning new skills, reducing stress, socializing, and building self-esteem, but enjoyment is at the top (in most studies).

Here are some factors that lead to intent (and having intentions is the best predictor of behavior):

1. Attitude: Keep it positive! I know this can be difficult for many people, but you have to try to focus on keeping everything positive! If this is very difficult for you (as it is when I look at my own goals), then enlist some friends who are positive… which leads us to the next one…

2. Social Norms: If you are around people who live healthy and balanced lifestyles, chances are you will also be more aware of what you eat and have some exercise in your life. If you are in a running group that is always competing and winning awards, you will also step up your level of competition and training. If you are in an exercise class that focuses on physique, you will adhere more to behaviors that will get you that physique. There are social norms set by various groups (unique to each group). Find one that keeps comparisons low, keeps things positive, and encourages a balanced lifestyle!

Once you have this exercise behavior, it starts to become part of your identity. Now, it really shouldn’t be the only thing that defines you, but it will be a big defining part of you. Many people know me as a runner (mostly because I can’t stop talking about it… and when I meet people for the first time, I often ask if they like running. Usually I frown real big when they answer, “Heck no”).

Anyways, these are great things to know if you are an exercise enthusiast or instructor! Keep it positive, encourage healthy norms, and let a beginning exerciser start at a level that is not going to make them suffer from DOMS for hella days (they’ll never come back). And, of course, make it FUN!

[Side note: if you are a coach, don’t ever use physical activity as a punishment! Part of the reason so many people hate push-ups or running laps is because they were, at some point, punished for undesirable behavior with running laps or doing push-ups (or other liners or whatevers). We want people to get enjoyment out of exercise, not associate it with punishment]

A little something about goal-setting that I’ve mentioned before: It’s best to make it a 50/50 goal, meaning there is a 50% chance you’ll succeed/fail. It’s been found to be the optimal level of being challenging but attainable. Make it too easy and that’s no fun to attain (beating elementary school kids in basketball). Make it too hard and you set yourself up for failure, allowing your too-big-of-a-goal be almost like an excuse for not attaining the goal (losing to professional basketball player).

I feel like my goal for M2B Marathon is pretty much right at 50/50. I’ve been able to keep up, for the most part, with the Hansons Marathon Method. Just ran a 9-mile tempo today! 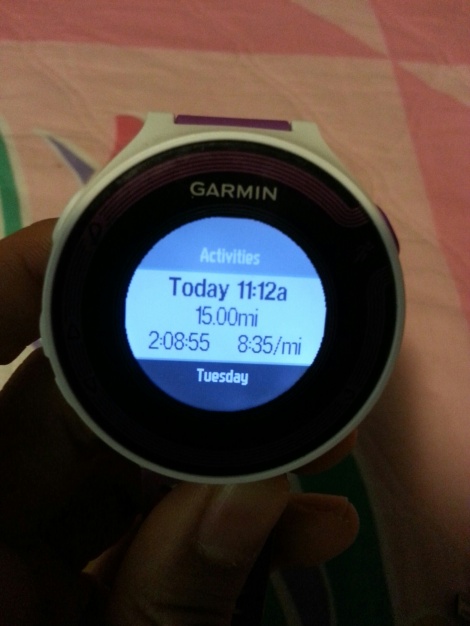 Here’s my fear… that I will be over-trained! I found that I don’t like to keep my eyes glued to the Garmin the whole time, but then I end up speeding up a bit and get under 8:05 territory. I shouldn’t be running anything under 8:00 for the tempo’s. Grawr. I guess I’ll have to look at it more often.

I had a GU after the 5th tempo mile, and music after the 7th tempo mile. This was all done at the track (switching directions every couple of miles. Luckily, there weren’t too many people there).

Was it hard? YUS. But doable? YUP. It totally gives me a confidence boost whenever I get through runs like these!

My fro-yo toppings are becoming less and less healthy. I used to only put fruit and nuts. Now I switched over to mochi and muddy buddies <— awesome topping, btw.

What is the #1 reason you keep doing what you’re doing (as far as working out/exercising)? [Running and racing is fun for me!]

What was a reason you fell out of a certain exercise program or activity!