Hope all has been fantastical with your Thanksgiving celebrations!

Thanksgiving morning started with our annual Run Turkey Run 10K/5K! I decided to do the 10K for the third year in a row. The first year I ran it, I had ITB issues. The second year, I was in my off-season and ran it for fun.

This year, I wanted to go for it, but it would be completely up to what my left hip would decide.

Said hello to these lovely ladies before I lined up at the start! (PC: Linh)

I got up pretty close to the front so that I wouldn’t have to dodge to many people. I settled into a nice rhythm with like two other people (one who I would find out in the last mile is a RunningAddict!):

It was pretty chilly at the beginning, so I was thinking of keeping my jacket on the whole time, but after about 2 miles, I tied it around my waist and kept with the same rhythm

^HEY! I recently bought Altra’s (Intuition 2.0) and they were AMAZING to run in!

Anyways, around the second turn around, I saw a bunch of boys and the first girl go by. Got to the turn around and realized I was going to be able to eek out a second or third overall female finish if I kept it up.

I continued to follow Jay, who set a great pace for me and then at the end, he told me to go ahead of him… and I went in for the final kick (PC: Joe):

I got to the end and realized that my left hip did not ache or complain at all! WOO HOO!

As I was cooling down, I waited for Esther and Charlston to come in:

They finished up the 5K with big smiles on their faces! It was so nice to see them run it together!

Checked the finish times and it said I was the 5th overall female for the 10K. WHAT. Oh, well. I was 2nd in AG.

Linh and Amy also placed in their AG, and they were kind enough to wait and collect my AG prize for me:

There were some fixes to the finish times and I got this nice message from Linh and Amy afterwards:

YAY! I was so happy with this prize, especially because I thought I would be walking a lot in the second half. I guess taking a big long break was just what my hip needed 🙂

Thanksgiving lunch was really great! My mom made a turkey and it turned out fantastically!

I was comfortably full afterwards :). Good thing because we went to watch Interstellar and we weren’t suffering from food coma for the nearly 3-hour movie.

That movie was so interesting and entertaining. I love stories that are so unique and different :).

Had kalbi jjim with Joe’s parents for dinner afterwards and it was delicious!

Black Friday was awesome, too. Got to see my friend try on wedding dresses (but no pictures, just so the groom can be completely blown away when he sees her).

Then we got lunch at Dish n Dash with Esther and Charlston: 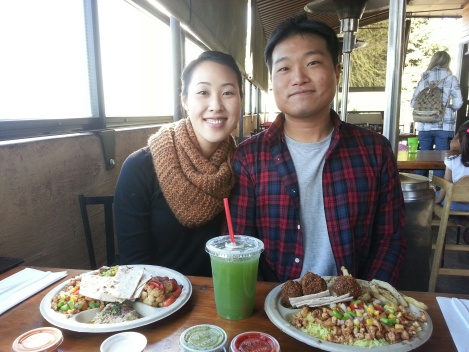 And after all this, I have not done any studying or preparing for finals.

In completely random news, I went to eat something at the mall and tried a sample of this amazing sandwich (rustic stuffing bread, turkey, cranberry dijon mustard, apple, cheese). I forgot where I got it from and thought it was Le Boulanger… and I was wrong.

Then my mom was telling me about this amazing sandwich she ate which had all of those… and I realized it was the exact sandwich I ate! She said it was about Boudin, so we went and got lunch there. Also ate the butternut squash soup in a stuffing bread bowl. OMG, so delicous:

What was the yummiest thing you ate this past week?

Any Turkey Trot this year?

Did you go Black Friday shopping?