You may know that I recently went to Napa.

The reason we made a random trip out there is because we had a race in Merced (the Merco Credit Union Half Marathon). This course is a tough one to race because of some considerable head wind, heat, and an uphill finish.

BUT… it’s kind of a nice one to pace. I had a couple of people who were with me the entire race (until the end when they finished ahead of me. Again, that is what pacers consider to be a job well-done! *pat myself on the back*).

Here are some great pictures that Linh got from the event (I always pace with the RunningAddicts):

Amy from fitnessmeetsfrosting raced this one! She did so well considering that all of the elements were against her having a good time o__O

Okay, now on to NAPA.

Our first stop was to the Black Staillion Winery for some wine tasting.

We actually had a BOGO-free deal and went with trying the reds. We also walked around to see the different grapes and the flavor profiles of all of them. Joe told me to look more pretentious as I pretended like I was picking up on the scent of licorice and currants (not that people who know lots of about wine are pretentious… we were just being buttfaces): 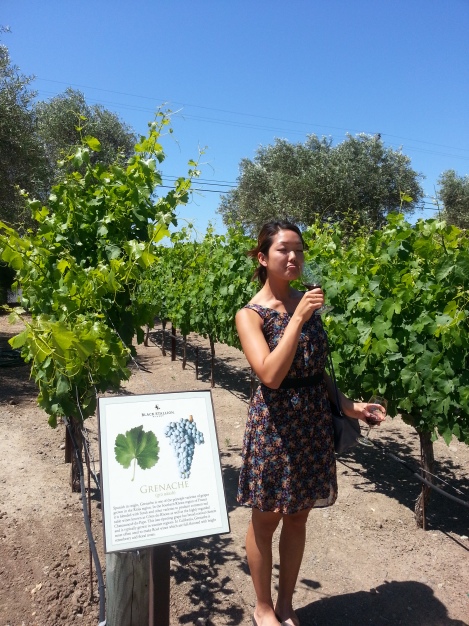 From the ones we tasted, I actually liked the Syrah enough to buy a bottle!

Anyways, we later went to the Oxbow Public Market to try some different foods.

Ate some oysters (OMG, so good!) 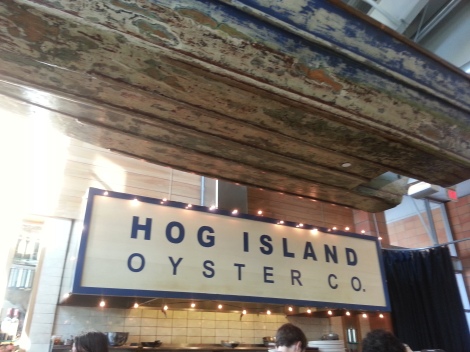 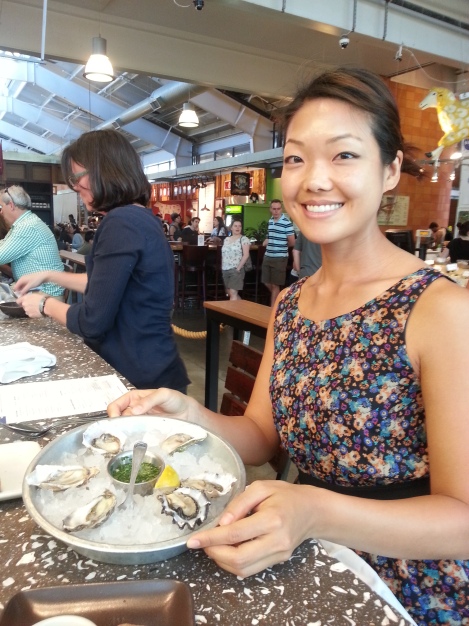 We also went to ZuZu for tapas. YUM, dude.

Unpictured is a cheese plate that I enjoyed with a fig and almond bar (it was amazing. Just two ingredients. Figs and almonds. Packed together. SO GOOD).

We went to the pool in the morning and was greeted with this hilarious sign. 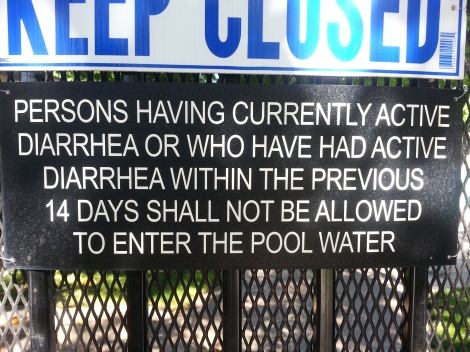 Pretty sure that means there was a guy who had explosive diarhhea two weeks prior to entering that pool and everyone got the same thing?

Anywho, I wanted two pictures there. One where I was posing, and one that shows what the camera does not:

I have wanted to lose an extra five pounds so I wouldn’t have too much wiggle in certain areas (nothing I can do about my thighs, but less in the abdomen would have been cool). I would have to be quite strict in what I eat (and don’t eat) in order to achieve this, but obviously, I don’t like to do that (see previous food photos, haha). Plus, getting too stuck on a weight goal is dangerous because of my past history of eating disorders.

SO… my decision is this… I will NOT strive to lose the “last five pounds”. I think we all have mentality where if we just lost the last five pounds or just get that job or just get a girlfriend/boyfriend that all of the pieces of our lives will fall right into place and we will finally feel fulfilled and amazing (okay, sometimes that happens, but it won’t be perfect).

Guess what… it’s not so. Our human nature is to want more (or perhaps find something wrong with it after to get it). When I was in high school and became anorexic, I said that whole “lose the last five pounds” thing like 5 times. I would get down to 125 and say it again. Down to 120, and I’d say it again. It continued until one day, I was 98 pounds… and STILL trying to lose the last 3 pounds.

Losing the last five pounds (of fat?) will only contribute to some sort of temporary happiness. Challenging yourself and striving to be better is fine, but do not mistake those outward achievements for true joy. There is not really a happy weight… just happy people who weigh what they weigh. Be thankful for the time you have right now and find joy in your current circumstance (easier said and done for some, I know). Enjoy life now! What are you waiting for??

Do you have amazing tan lines like I do? (shorts tan, socks tan, racerback tan)

Do you enjoy wine?

Which of these elements would be the toughest for you to face during a race: uphill finish (one mile long), headwind, monotonous scenery, or temperatures above 75 degrees?

6 responses to “My Decision to Lose the Last Five Pounds”